I never thought I would hear that about WRITING from my 6th graders!!! For the last 10 minutes of each class (yes..on a FRIDAY even!) I had each student start writing a story…their first story of their own. It was very structured and I was worried they might balk at it….but they were so happy doing it!!

First we reviewed parts of a story (characters, setting, conflict, resolution…there are more but that is all we can handle right now!) in English ( 2 minutes tops)

Then we brainstormed, out loud, in Spanish, what we could say about Brandon Brown as the lead character in the book we are reading. I did not write anything on the board. I told them that they then had five minutes to write between 3 and 5 sentences about a character of their own making. It could be a person or an animal or an object THAT THEY KNEW HOW TO SAY IN SPANISH.

This was the time when I introduced, and didn’t give in on, using only language that we have used in class. I felt that I had to start that way immediately, in order to establish that as a skill and build on it.

Step 2: I wrote the phrases One day, One night, One afternoon on the board and asked students to help me think of others we knew how to say (One morning, One week, One month, One year) Then I added On Monday (brainstormed other days), and In January (brainstormed other months).
I gave them 2 minutes to pick a time/date when the story was taking place. They could use one phrase (One day) or a combination (One day in June) and write that on their papers.

Step 3: I wrote the phrase _________is in/at school. Then they brainstormed other places they could say (only two or three!) I gave them permission to also use proper names of cities, countries, stores, etc. And one minute to write where the character is at the start of the story.

Step 4: Turn to a partner and read what you have so far out loud. Check to see what s/he understands. (THEY LOVED THIS PART!)

And that is pretty much as far as we got. It took less than 10 minutes, even with classes of 30 +. Because they were ready. Because we had waited. Because now they had language they could use.

All three classes groaned when it was time to go because they hadn’t been able to finish!

I am so looking forward to next week! (I don’t remember saying that very often in February!)

and I don’t seem to be able to predict them in advance.

That morning went well. It was a block day and the second block went well too. I’m not even sure that it was going so badly when I lost it. It seemed like it at the time, but looking back, it is hard to tell.

One minute I was tolerating the minor chaos of 30 students working in 10 groups of 3. Some groups were still working and some were done. Some students were passing back papers for me. I figured those still working needed about 5 more minutes and I could round everyone up and we could end the class on a focused note. And then…it all crossed over the edge. I had mis-timed things and the ones that were done were DONE and then I was DONE and well…that was that.

It was lights out, heads down on the desk and total silence. I was able to take deep breaths (although it was a little tough not to flash back to 5th grade when my teacher did the same thing to us…..and I got yelled at because I couldn’t stop giggling)

They apologized. Some quite sincerely and one who felt righteously wronged because although she admitted that she hadn’t been doing what she was supposed to the rest of the period, at the moment I got angry she was doing what she was supposed to and how dare I ask her to put her head down and be quiet? :o) The next day I apologized. (I needed a little time…) And life went on.

Valentine’s Day is….well…highly stressful. For middle schoolers (who see every holiday as a good reason to eat all candy in a 5 mile radius) it can be hundreds of ups and downs in one day. There are a ton of wonderful love songs out there (even some G-rated ones I can use at the MS level) and cute videos and sweet stories…and well…you get the idea.

Today I wasn’t brave enough to do any of those things. At least not with my 6th graders. So I went back to basics, back to simple, back to fun.

So much fun to watch!! The 8th graders loved it too…although we also did Jesse and Joy’s song Chocolate at that level!! 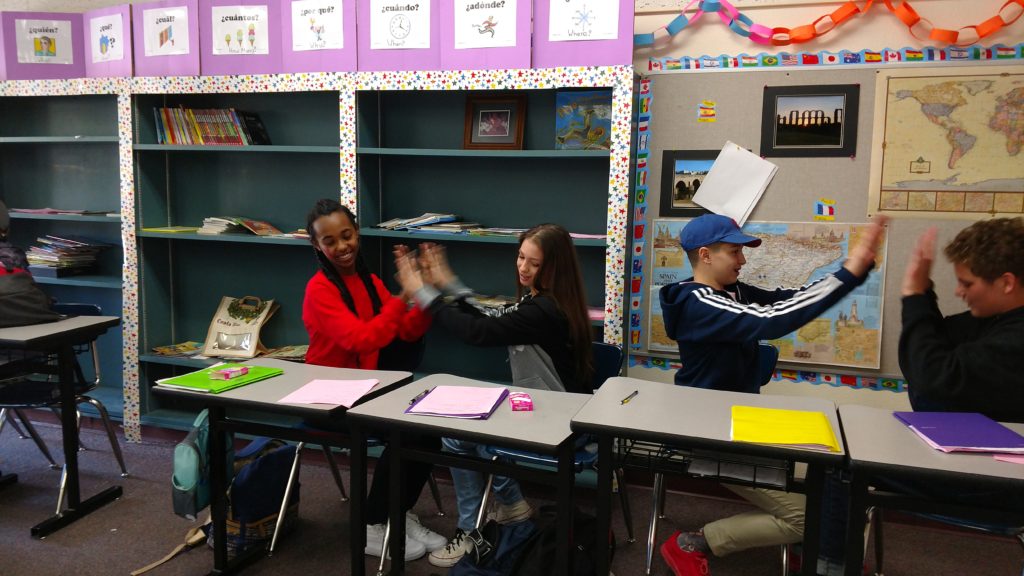 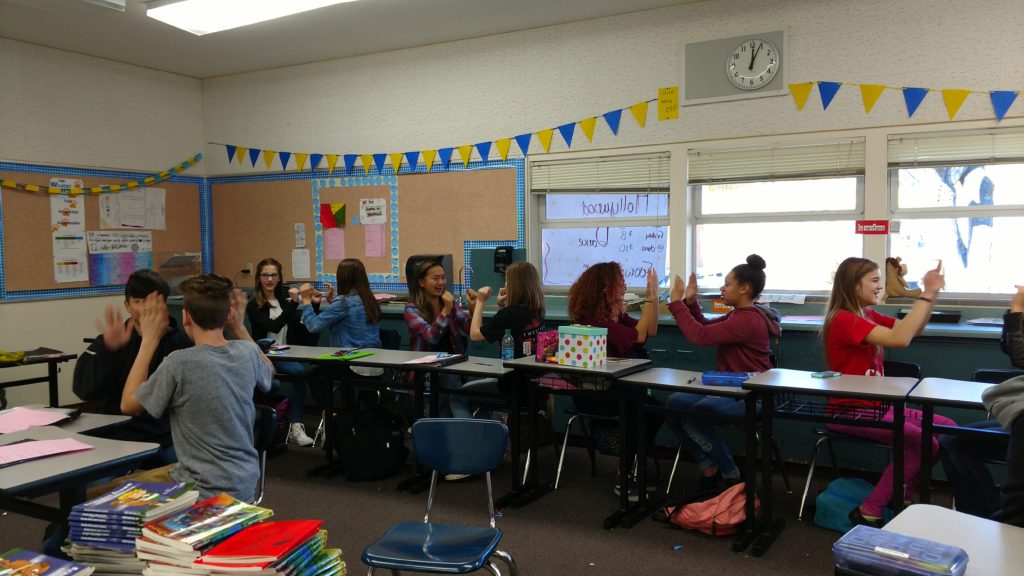 Learning what my middle schoolers can handle, or want to handle, on any given day..
with love,
Laurie
PS I still haven’t heard from the folks who give permission to share the two videos I also used today for a few minutes each…but if you go to www.youtube.com and search for Chocolate by Jesse y Joy and Cho co la te Juego de Manos you will find what we watched!!

I admit that I can be a bit old-fashioned. And for middle-schoolers, that just means old. 🙂
I’m also the age of their grandparents (or older!!!) which doesn’t help either.

But I am also selfish with our time!! I really did not want to lose time because it might seem “fun”. But there was no way to know without trying….so….here is how it went:

Holy Moly they did have fun. About 90% of them. More about that in another post.

We played for several days in a row….which I didn’t want to do at all. But…my kids seem to need a few times to get used to things and so that was good.

Choosing team names quickly became more fun than anything else. By Day 2 I only accepted Team 1, Team 2 etc. I wrote the name on a Post-it and gave it to the player with the phone. Anything else became a way to make the class laugh and get away with finding a name that the teacher didn’t know the meaning of/reference to. That WAS a waste of time. So, as much as I could see how fun it was 🙂 , that was out.

I’m glad that I waited until we had really set a tone for the class. Not everyone had a phone, and sharing is not what middle schoolers are best at. So it really did take a few days for them to work how who would play with who and do it nicely. It worked out wonderfully in the end.

They felt super successful answering the questions. Really successful. It was the instant feedback, video-visual high that they have grown up with and it fed that need.

We did several types of questions. The “jumble” which puts things in order was not a hit with this group. Multiple choice was. The vocabulary ones made them feel smart. The reading ones got them reading even if they got the questions wrong. :o)

The best games were the ones I had time to make because I know my kids. But it was nice to not have to make everything.

This is not something they are ready to do only in the target language. So much energy and excitement that it all came flying out in English. We will be working on that. :o)

I do not plan on playing often. Never do too much of a good thing. :o)

If you haven’t tried it…think about it. Not everyone needs a phone/device but the more the better unless you are good at setting up teams. Also…if you are relying on the school’s internet, that can be a challenge.

I felt that I had to warn parents about the possible use of data!! The kids of course, did not.

Next time, I’m having kids help me plan questions to type of for the game!

You can find Kahoot at https://getkahoot.com

It’s been three months. Days that sometimes seemed very long but months that have been very short. I’m not sure when it happened exactly, but recently there has been a change in my room. It feels like we are no longer strangers. This is so much better. I really was worried it wouldn’t happen.

I know, maybe everyone doesn’t really work this way, but I like knowing who the kids are in my room. I know their names. I know when one has new shoes. I’m learning who is always hungry and who never has anything to write with. I know whose family can afford a trip to Cozumel this spring and who wants to hang out after school and not go home. I know who will paint their face, wear feathers and paint their nails for Rally Day. I know who stays home on Rally Day because the energy level all day before the rally is too much to handle. I know who thinks they are old enough to be in high school and who still keeps a stuffed animal in their backpack every day. I know some things I am grateful to know, and other things that punch me in the gut when I think about them.

I don’t know something about everyone. But we have gotten to know each other. It’s a wonderful thing. I really didn’t enjoy working with strangers.

So, she and I are no longer strangers either.

She wanted very badly to be a cheerleader but just couldn’t jump. And her glasses fell off.
She thought she was smarter than the teachers some days and smarter than the other kids most days. And so she was a smart mouth sometimes. And then she cried because it felt mean.

She doesn’t have 7th grade pictures because her family of 7 were all living in a one-bedroom apartment transition housing and there probably wasn’t enough money……even if her mom did say that it was because the pictures were too ugly. That was less scary for her mom to say, but not less hard for her daughter to hear.

She fell desperately in love for minutes at a time with boys she absolutely did not know at all and totally ignored the ones she did. Or teased them unmercifully.

She daydreamed in class EVERY SINGLE DAY, often all period long.

She felt like she had to save the world and yet had absolutely no power at all.

On the outside she was a greasy-haired, four-eyed, smart-mouthed, desperately shy, passionate, closet-romance-reading, cry-at-the-drop-of-a-hat, got-detention-for-laughing-in-class child having to deal with womanly issues and a great big world. And most of the time she didn’t do it very well. I guess that was the point. :o)

I was everything and nothing that I wanted to be. Getting to know her again has really helped me to get to know them. Loving her, for the first time, has helped me to love them too.

I’m a little slow, as usual, but I have updated the Training page here on Hearts for Teaching. I try to keep it as complete and current as I can, but please be forgiving. If you know of anything that should be on there….send me an email at lclarcq@yahoo.com